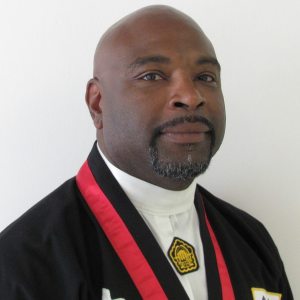 I have been involved in martial arts since the early 1970’s, when I saw my first Bruce Lee movie “Chinese Connection”. Between 1970 and 1988, I trained in and studied numerous martial arts such as Chinese Gung-Fu, Tae Kwon Do, and Shao Lin Boxing just to name a few. In 1988 a friend (Jeff Green, now Kwan Jang Nym or Master) invited me to come to a free class at his Do-Jang on Simmon street in Galesburg, Il (Kuk Sool Won™ of Galesburg) to meet his instructor Bob Zefo (now- Kwan Jang Nym). After that class I was hooked, I was promoted to 1st degree black belt in 1991, and began formally teaching. I have taught all ages and have developed a rather unique teaching style for children’s classes, with the understanding that:

Pyung Kwahn Jahng Nim Ben Mitchell has competed in hundreds of tournament and has won numerous titles and grand championships, as well as conducted demonstrations and fund raisers for charitable groups in the community. (see photo)

Martial Arts Goal: To teach my instructors to be better instructors and become more successful than I am in life and Martial Arts, which will in turn flow down to their students. I want to give my students and the public a safe, positive facility to grow stronger and learn to succeed in all walks of life. My students learn Discipline, Respect, Confidence, Self-Defense and gain physical fitness while having fun.

Favorite Proverb: One who dares to teach, should never stop learning!!!

Principle Phrase of Life: You’ve gotta do what you gotta do…before you can do what you want to do.